A curious detail is the one that Google Maps discovers in its new update of August 2018 in its desktop version (not so in the mobile version, although everything seems to indicate that the change will also take place in that version soon).

In a district, city, regional or even country scale, there are no differences with previous versions, but when we rise above the earth globe we begin to see the differences. Until now, moving away from the continental scale and beyond, what was shown was a “two-dimensional” map of the world in Mercator projection.

Technically, it was a “Web Mercator” (WM) projection, a variant of the classic one known to all (remember that a cartographic projection consists of a mathematical construction that allows a spherical surface, or a geoid like the terrestrial one, to be represented on the two dimensions of a paper or screen, which is not easy). The deformations introduced by the Mercator projection in these scales, being a projection based on a cylinder tangent to the terrestrial equator, make the polar regions appear very distorted. This is the classic example where Africa appears smaller than the island of Greenland.

However, the projection devised by Gerardus Mercator in 1569 continues to be used since, in order to represent cities or regions, it is very adequate, the calculations necessary to manage it are relatively simple and it is proportional, that is, it distorts the space in both the north-south and east-west axes in order to maintain the forms. Otherwise, representing a square building in the real world would lead us to have to draw it as a rectangle (and so on with any object, which will keep its “real” shape, as well as preserving, for example, angles on roads and the like).

Okay, but when we leave our neighborhood and fly over the world, Mercator reveals a very distorted world to us. Until now it was considered a lesser evil in Google Maps but, following the example of Google Earth, here’s what happens in the new version when we move away (simulating a three-dimensional spherical landscape, fixed matter)… 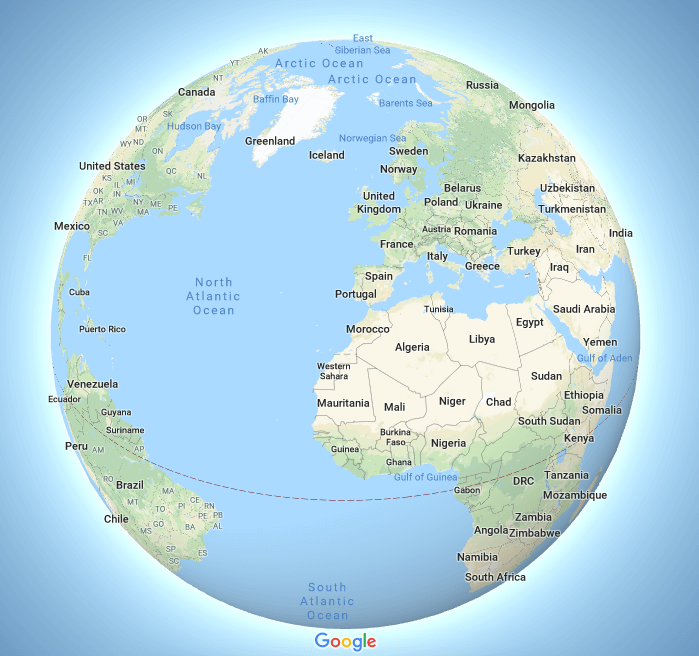 Google Maps mainly uses the Mercator projection because it allows to preserve the angles. At first, Google Maps did not use this projection, and as a consequence in cities at high latitudes, right angles could not be maintained on roads and the like. That’s why they decided to go to Mercator, because although zooming in on a continental scale introduces distortion, at the level of city maps is much more appropriate.

Discover the Magallanes-Elcano expedition in a 360º environment